The project is based in Bracadale, on the west coast of Skye.  The site had been heavily grazed by livestock in previous years.  The native woodland creation will improve woodland habitat networks throughout the area, providing links between other established areas of woodland. 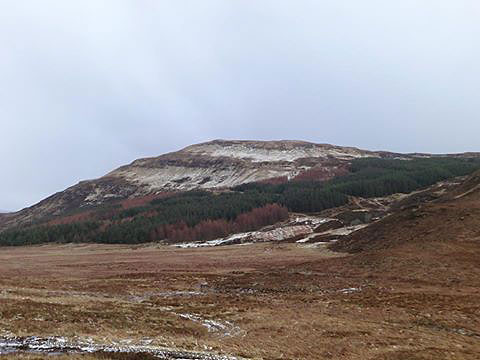 The 4 Gesto site prior to planting in 2015.  Picture:  Highfield Forestry

The carbon from this project is already sold.

Highfield Forestry, the project developer advertised the carbon 'for sale' on a 'shop window' in the UK Woodland Carbon Registry, managed by Markit (it is known as the 'Request for Information Platform, and has 'for sale' and 'wanted' pages like Gumtree').  Through this platform they found a buyer in a short period; Forest Carbon purchased the carbon on behalf of their partner Allstar Business Solutions, the UK's largest fuel card supplier.

"Subscribing to the Woodland Carbon Code provides an additional source of finance for landowners, enabling marginal, economically borderline schemes to be afforested.  It is another reason to encourage new planting in the UK"

"The owner of 4 Gesto has an interest in carbon forestry and was keen to get involved as the new mechanism developed.  It also generated another capital contribution for this native woodland, which enabled it to proceed"

Initially, Highfield Forestry developed this project on behalf of the owner.  In 2015, Forest Carbon took over the ongoing role of project developer.

The site was initially enclosed by deer fence, to exclude grazing animals and enable young trees to grow.  The fencing was planned sensitively to ensure that it did not affect the local Golden Eagle population and work was scheduled to avoid disturbing them during sensitive times of the year.

The UK Forestry Standard was adhered to during the design and establishment of the native woodland.  The ground was prepared, and trees planted, by a national contractor.

The conversion of this heavily grazed upland site to native woodland will link up existing forest plantations to form a larger more diverse area.  It will reduce pressure of grazing animals on ground flora, create a habitat for invetebrate species and allow bird and animal species to flourish.

The woodland is planned to protect and enhance the riparian areas within the site, increasing their biodiversity value.  This should allow moss, lichen and liverwort communities to develop.

The new native woodland will enhance the highly visible mountainous landscape on Skye, increasing its value as a tourist and recreation destination.