Glen Lochay is located to the west of Killin in Perthshire.  It is likely to have been forested in the past, but was cleared to enable sheep farming, and contains the remains of numerous sheilings from past habitation.  Prior to the woodland creation project taking place, Glen Lochay estate was managed as a traditional upland hill farm with both sheep and cattle grazing. 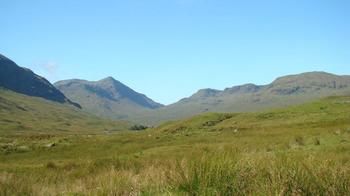 Carbon Buyers - Why buy from this project?

The Forest of Mamlorn project in Glenlochay is a landscape scale project to establish a mosaic of permanent native forest covering over half of the valley in the upper catchment of the river Lochay, a tributary of the river Tay. Opportunities to create such a large coordinated area of new native woodland are rare, and this project has overcome obstacles to regenerate the valley and provide many benefits for recreation, biodiversity, water quality and flood management.

Water Quality and Flood Management:  The project will have beneficial impacts far beyond the immediate and visible. Root action, leaf drop, microbial and insect activity will benefit nutrient and mineral retention which in turn will prevent damaging run-off, improving water quality.  Larger volumes of water will be retained for longer in these upper riverine reaches, helping to mitigate flooding further down the catchment.

Biodiversity:  The design of the woodland shapes and tree species used are driven by the multi-mosaic mix of soil types encountered. This approach gives an extremely organic and natural effect. which has also created over 400km of woodland edge habitat along with dense woodland and open glades within the wooded areas.  In mid to long term this will allow for expansion and consolidation of a wide range of native and endangered species back into the remote glen, underpin the survival of our eagles and provide potential release sites for the Scottish wildcat.

Longer term it may be possible to translocate larger species such as European bison or  elk and wild sheep to the forests in the glen, completing the establishing eco-systems.

Recreation:  We are fortunate in that the existing tracks form a circuit that allows people to experience the woodlands from within, along the riverside as well as from 400m above, where the forest shapes are designed to frame the wider landscape.

Donnie Broad, General Manager at Pitcastle Estate says:  "In establishing this permanent, linked forest habitat we realised that revenue from formerly extensively farmed ground would be given up for a term well beyond any grant support and indeed individual’s lifetime and that to secure this forest in the landscape for the long term, there had to be an additional benefit derived, beyond just the increased capital value to the property and the shelter provided for farmed stock and wild game".

"The potential for extra income via the selling of carbon units under the WCC scheme offered exactly this, while dovetailing nicely with the owner’s ethos of re-generation and conservation. This income source makes the difference between the whole project being a cash neutral exercise and a cash positive one. This in turn allows for more inward investment to undertake further projects to augment the traditional income streams associated with these upland estates".

"The carbon market being out with our usual experience it was vitally important to us, that the validation and verification (checks and balances) had suitable rigor to give potential investors confidence in the level of carbon sequestration forecast from the project. The WCC provided this along with independent evaluation from Acoura".

The estate is owned by Robertson Holdings and managed by Pitcastle Estate Management Ltd. who operate two estates as one traditional business with the usual spread of tourism, agriculture, forestry, farming and renewables.

The land was purchased by Mr Robertson from  Edinmore estates in 2006 with the intention to re-afforest if possible. The creation of such a large area of woodland required the completion of an Environmental Impact Assessment.  This involved consultation with the public and neighbours as well as the relevant public bodies.  The Assessment considered public access, red deer movement, protected habitats and species, archaeology and designated sites.  Landscape architects also considered the views from mountain tops, forest shapes and fence lines.

Due to the size of the project we had significant problems to secure sufficient fencing materials and experienced labour to erect fences.  Seed was also collected and grown especially as tree nurseries did not hold the volume of stock required.   Staff had to be diverted from their normal sporting let duties for a period of 4 years to enable the establishment of such a large area of woodland. 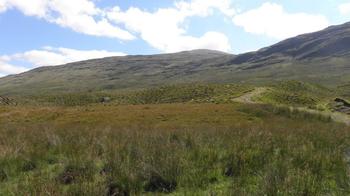 One of the planting areas in Glen Lochay.  Picture:  Pitcastle Estate Management Ltd.

Biodiversity:  The project will create extensive areas of woodland and woodland edge habitat in order to increase biodiversity in the Glen and support a wide range of native species, both plants and animals such as black grouse, pine marten and golden eagles.  We also plan to release Scottish Wildcats into the area with the increase in suitable habitat.

Landscape:  The plantings have been placed sympathetically within the wider landscape to enhance the wild aspects of the surrounding hills, to create a very organic natural effect.

Shade and Shelter:  The planted areas will also provide shade and shelter for species such as Red Deer, as well as for sheep and cattle which will continue to be farmed in the open areas.

Flood reduction:  The Tay catchment suffers from flooding in its downstream reaches which effects both agriculture and populated areas including Perth.  I  It is envisaged that the growth of the forests will help to alleviate flooding downstream by locking up more water in the higher reaches of the River Tay Special Area of Conservation and releasing it slowly to prevent the flash floods and erosion of soils.

Water quality:  The Tay is an important river system for Salmon and the creation of woodland upstream and reduction in flash flooding will also reduce the silting of salmon spawning areas allowing them to flourish.

Restoration of peatland habitats:  Excluding farm livestock and deer from many of the raised bog areas within the designed forest will allow for respite from trampling and associated erosion and carbon loss from these sites and in time allow complete recovery.

Recreation:  A new car park has been created, as well as many kissing gates installed within the fence-lines to allow continued public access throughout the glen and onwards to the surrounding mountain tops.